Our trail is open 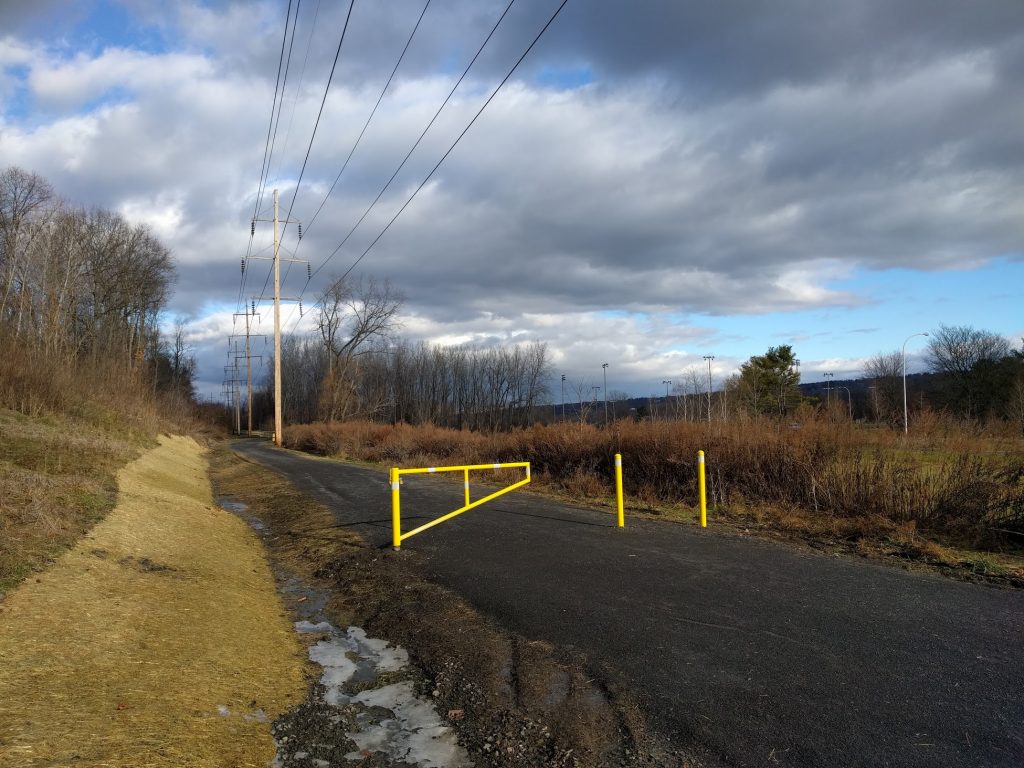 Beginning of the trail in Cass Park 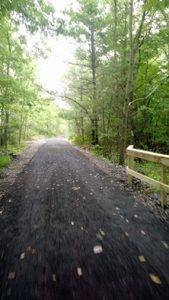 It looks like this is, finally, at long last, the trail we’ve been waiting for. This spring the park people started pretty early with work that didn’t really make much impact; very important, no doubt, but it didn’t increase the usefulness of the trail, didn’t provide any new surfacing. But, then, maybe in July or so, it became clear that this was the real thing — lots of machinery, serious moving around of stone and soil and culverts, and a layer of smoothed gravel that went all the way down to Ithaca from the park. And in the last week or two we finally see the final crushed stone surface on several miles of trail and more laid every day.

Truly, it’s happening. Forty years of fussing and complaining melt away as we see what a jewel it will be for our enjoyment and use. Thank you, thank you.

The trail on the map

This is an interactive map of the trail; you can zoom in to find cross roads, etc.

Last week we heard from officialdom about how bids will be invited, contracts awarded, and work — yes, actual shovels and gravel and culverts — work will begin/resume/appear in a year. Meanwhile, the Black Diamond Trail is a resource that Ithacans and others in our region are using daily as a beautiful and restorative outdoor venue. The “work” will be nice, but we already have a trail that is possible — and delightful — to traverse between Cass Park and Taughannock Falls State Park.

There haven’t been a lot of reports from the field, accounts of what the trail is like in detail. But, we’ve had severals reports of problems or questions along the course of the BDT. So, today Diana and I went for a bit of a reconnaissance walk to check up on a few things.

In general, we can report that the trail really looks terrific. We confirmed that you can walk from Cass to Houghton Rd with no problems. We only started north from around Glenwood Heights Rd, but we encountered others who had walked to that point from Cass. And, for the most part, the trail looks great. Not as great as it will eventually be; but, considering the proper work hasn’t even begun, it’s great. There are rocks, mostly the railroad ballast that’s hard on feet and bikes; but, they are sunk into the soil somewhat in most places and one gets used to them. And, then, there are some pretty tall weeds through which the single track of a footpath leads. In all, the BDT is between the luxury of a finished rail-trail and the unpolished roughness of a hiking trail.

s looking only at the actual trail and conditions. I don’t know what to make of it, but the Parks people have apparently decided to declare the trail unapproachable. At each road crossing there is a rack of several signs put up by Parks, and one of them declares:

“The property is not suitable for trail or any other use in its present condition.”

This so absurdly flies in the face of the obvious utility of the trail that I don’t know what to make of it. I suppose it is a phrase that comes from lawyers. At first, I was delighted to see signs that are obviously made specifically for the Black Diamond Trail, leading me to believe that this trail will become reality. But, this assertion of uselessness shows such a discord between “us,” the trail users, and “them,” the trail builders that I wonder where it can lead.

But, these “boilerplate” disclaimers aren’t the worst of it. At the Glennwood Heights Rd crossing, heading south, we see what sure looks like a serious warning.

Several people have inquired about these signs, because they really go beyond any of the generic warnings that amount to little more than “walk at your own risk.” This one, with its “absolutely” and “violators” and “prosecuted,” is really formidable. I don’t know what to make of it. Why has Parks posted such a draconian warning?

Of course, we walked past the sign to see what might be the danger. As far as we could see, there is no particular hazard beyond what you find all along the trail — some steep banks next to the path and some rough ground. The place where the trail was completely washed out a few years ago has been filled enough that the trail just takes a bit of a dip and the culvert that failed on that occasion seems to have been repaired and fortified.

I hope that we can initiate a conversation with Parks to clarify these things. Do they really mean that I will be prosecuted for walking that section of trail? Do they really mean the trail is not suitable for trail or any other use? Or, can we come to an understanding that, while resources are gathered, the trail can be a wonderful thing as it is — not fully the resource we envision, but still a wonderful thing. Signs that condemn and prohibit anything short of a fully finished trail only erode our trust and opinion of the Parks department. Certainly idle threats of prosecution diminish respect. But, so would real threats in a case where there is no hazard.

Another point of difficulty along the trail was the crossing at Houghton Rd. Coming south on the trail, if one were to cross the road in a straight line, one would be on a private driveway. the actual trail at that point, one must turn left (east) down the road a 100′ or so, then turn south off the road onto a short connection back to the rail line. From the south, one would turn right just before a snow fence that the private owner has placed across the driveway. It’s a bit of a scramble down the bank and over to the road. Then, head up hill to pick up the rail trail again.

I gather that at one point there was no fence barring the walkers from going straight down the maybe 50′ of driveway to the trail’s continuation. And, people got angry. Now, there is the fence and a little sign, saying “Trail” to help find the true path. I made a couple little videos of the situation — it’s a request to Parks to fix the situation with the signs. The info is all there now, but it really isn’t clear. The first one is approaching Houghton Rd from the north, the second from the south.

And, approaching from the south:

The BDT lives, and it’s a great place to walk. It would be great to see it finished. But, if there are realistic obstacles to doing that immediately, it really seems that we should treat the trail better. There has to be a way that the minimal grooming we give roadsides could be brought to the trail — a simple mowing once or twice a year would do wonders. And, the signage could be changed to become informative rather than merely a series of CYA declarations for the authorities.

Trail Surfacing in the Works!

Feb 13, 2014. Today’s Ithaca Journal reported that Finger Lakes State Parks Regional Director Fred Bonn expects new work contracted by Parks on drainage improvements (culverts) and crushed-stone surfacing to begin by early Fall: “I think we’ll have sections of the trail open in 2014, but some sections may drift over into 2015,” Bonn was reported to have said this week.

In the meantime, municipalities (Town of Ithaca, City of Ithaca and Town of Ulysses) have been chipping away steadily at replacing and repairing culverts along the south end of the trail and at road intersections. (Thank you, municipalities!) As many of you who use it know, now that the two bridges are finished, the trail is already passable for walkers and skiers from Cass Park to Taughannock Park except for the short washed-out section just south of Glenwood Heights Road that resulted from flooding last year. Most bicyclists find the gravel too big to ride on safely comfortably. Can’t wait for that crushed-stone surfacing!

As many of you BDT trail-users know, although 99% of the land easements necessary to construct the Black Diamond Trail from Cass Park to Taughannock Falls State Park were procured by FL Parks several years ago, one small stretch about 60′ long had remained in private hands until now. That stumbling block to construction has just been removed!

Sue Poelvoorde, Senior Natural Resources Planner for New York State Parks, announced recently that “the State of New York is now the owner of the former Holochuck property…the last piece of the Black Diamond Trail corridor between the city of Ithaca and Taughannock Falls State Park.”

Poelvoorde wrote that “engineers and landscape architects are in the process of pulling together plans and specifications for the trail construction. We intend to go to bid in early 2014. If all goes well with bidding and contract approval, construction could start by fall 2014.”

Major flood damage from last week’s storms occurred just south of the Glenwood Heights Road entrance. GPS coordinates are N 42° 29.431 W 076° 32.436.  Thanks to Tiffany and Raven for these coordinates and photos — 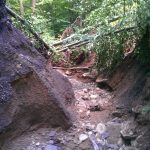 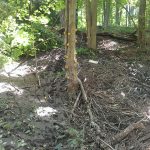 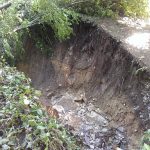 Jim Dunn, Park Manager, wrote to BDTEN on Aug. 12:  “We put up the barricades.  We have a lot of cleanup at Robert Treman [State Park], plus repairs, so it will be a while to get the BDT repaired.”

This morning’s Ithaca Journal reported that $950,000 in NYS funds will go towards improvements on the Black Diamond Trail “including drainage, surfacing, railings and signage (Taughannock Falls to Alan Treman).”

IJ journalist Haley Viccaro reported: “The funding is the second round of aid through the capital program to renovate and repair more than 50 parks and historic sites across the state. Cuomo said the $90 million investment would be provided annually over the next five years.”

There is still a lot of construction activity near Cass Park — a huge culvert project seems to be winding up with big concrete pourings in place, and pieces of culvert pipe lie along the trail, presumably waiting to be placed in other places. The trail surface, as you’d expect, hasn’t been improved at all except, to some extent, by being packed down by the truck traffic. But, the extent of work is, indeed, heartening. 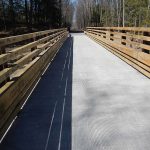 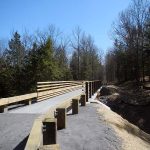 City of Ithaca Seeks $$ for BDT

ITHACA — The city has requested a $15 million grant to update city bridges and make progress on the long-gestating Black Diamond Trail project. The Strategic Transportation Enhancement Program Project grant would be awarded by the state, which would then be reimbursed through a federal transportation program.

Phase one of the Black Diamond Trail project, which is expected to be completed by mid-summer, will connect Taughannock Falls State Park to the Treman State Marine Park and Cass Park area. The grant money would be used toward phase two of the project, which includes plans to extend the trail farther into the city.

The city is also doing a project this year extending the Black Diamond Trail along the west side of the flood control channel, with crosswalk connections to Cedar Creek apartments and the houses on the west side of Floral Avenue.